< Back to Digestive Health 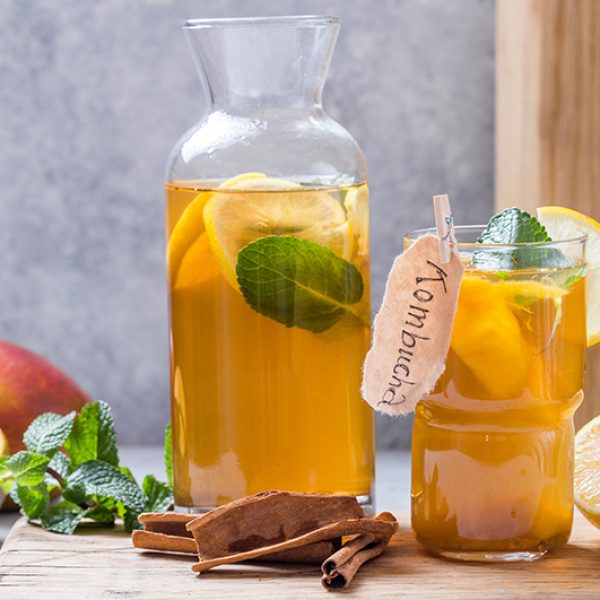 What is Kombucha?
Kombucha is a fermented tea that contains living cultures, known to help aid digestion.

What does it taste like?
Kombucha is a cultured beverage, so it does have a tangy taste similar to an apple cider vinegar. Our taste buds are so used to sugary drinks that the tart and slightly biting taste of Kombucha might initially catch you off-guard.

What’s a SCOBY?
SCOBY is an acronym for Symbiotic Culture Of Bacteria and Yeast. This living culture (which looks a bit like a slimy pancake) consumes sugar and caffeine during fermentation.

What are the floaties in the bottle?
These are strands of healthy culture! The culture is not visibly present at the time of bottling, but form afterwards as an indication that the product is still living and active. The longer that the product is bottled, the more culture strands form. Think of it like a coral reef that harbors billions of living organisms.

Who can drink Kombucha?
Every one of all ages can enjoy Kombucha! Just remember that children are smaller, therefore their servings should be as well.

How much should I drink?
Everyone has a unique system, therefore we suggest listening to your body when trying to determine the appropriate amount for you. However, if you are a first-time consumer, it is best to slowly introduce Kombucha to your system; have 4-6 ounces before breakfast and then gradually increase your intake.

How do I store it?
Because it is a raw, living food, ALWAYS keep your Kombucha in the refrigerator (33-40°F). Bottles should be stored upright and never on their side.

Can I shake it?
Do NOT shake the bottle. If shaken, an overflow can occur due to the natural effervescence. To mix the sediment, we recommend tilting the bottle gently back and forth.

Can I cook with Kombucha?
Yes! From cocktails/mocktails and smoothies to energy bites and divine desserts, Kombucha can be a fantastic addition to lots of recipes. Try out the recipe below as a tasty midday snack! Directions: Mix GT’s KOMBUCHA Gingerade with all other ingredients in a food processor. Mix well. Spoon out heaping tablespoons of the mixture and roll into small balls. Arrange the balls on a baking sheet and place in the refrigerator to chill for 30 minutes. Snack away!

GT’s Story
Raised by parents practicing Eastern philosophy, GT Dave adopted a spiritual view of the world from a very young age. Gifted a Himalayan Mother SCOBY in the early ‘90s, the Daves were intrigued by Kombucha’s ancient healing properties and decided to brew their own batches of the fizzy, fermented tea.

In late 1994, GT’s mom, Laraine, was diagnosed with a highly aggressive form of breast cancer. When she healed, Laraine shared with doctors that she had been drinking a very pungent, homemade tea. That tea was GT’s Kombucha.

Inspired by his mom’s experience, it became GT’s mission to make his Kombucha accessible for everyone, everywhere. At only 15, he began bottling his brew in the kitchen of his parents’ Southern California home and became the first to put Kombucha on shelves in the U.S.

At GT’s Kombucha, we’ve stayed true to the authentic brewing process of this sacred elixir for over 20 years. Our #1 selling Kombucha is raw, organic, naturally effervescent, and handcrafted in small batches – always cultured, never compromised.

Now, under the new name of GT’s Living Foods, we’re proud to remain a family owned & operated company. As we continue to embrace our innovative spirit, Mother Nature remains our main source of inspiration.